Many of our customers have a metric and chart named Average time to first purchase, which shows the average time between a group of users’ registration date and first purchase date. The data almost invariably slopes downward as time moves closer to the present. 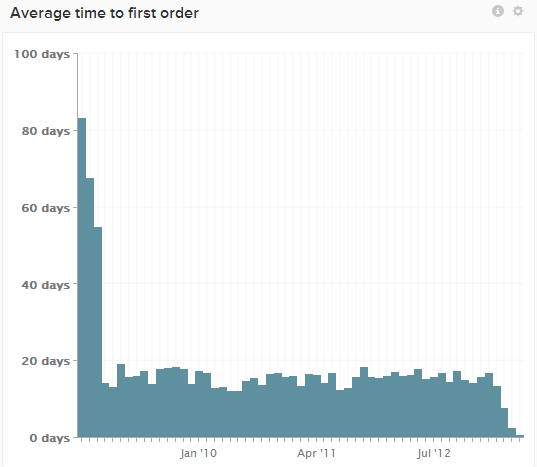 This is because these newer customers have not yet had the opportunity to generate any purchases that were made more than one month from their join date. Since users who have never made a purchase are not included at all (until they do make a purchase), this biases the average downward for newer groups of customers.

There are a few other potential ways to look at this metric that introduce less bias. Let’s explore one example.

You may have a chart on your Users dashboard named Time to first order cohort. This report uses the “Distinct buyers” metric, groups users by cohort weeks or months of registration, and shows the ratio (between 0 and 1) of users that made a first purchase in the following weeks or months after registration.

This cohort analysis is a good indicator of user activation rate over time. If this chart starts to flatten or plateau, and you’re still not near 100% conversion to buyers, it may be time to activate the remaining users via email campaigns.